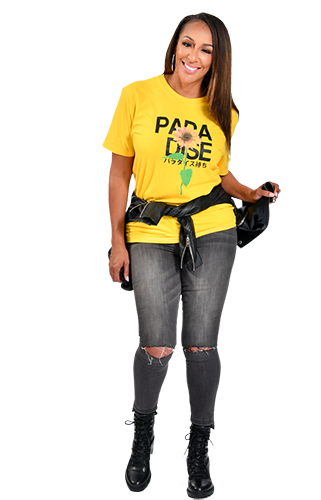 The hardest working woman in radio. A trailblazer and industry leader who has been entertaining radio audiences for years.

Entertaining, empowering, and enlightening are just a few words that describe the powerhouse media mogul. This talented and award winning personality is one of only a few women nationwide to have her own morning show. After co-hosting the nationally syndicated radio program “The Doug Banks Show”, DeDe now hosts her own radio show, “DeDe in the Morning”, heard weekday mornings on JUMP 104.5.

DeDe has appeared on CNN, FOX, Oxygen and BET and has interviewed world leaders from President Obama, to Hillary Clinton, to celebrities such as Jay Z and Beyonce. She is a philanthropist, community activist, mentor and volunteer. DeDe McGuire strives to continue being a popular media personality, strong working woman and entrepreneur.

She has been recognized within her industry and community. Some of her accolades include the International Black Broadcasters (IBBA) Lifetime Achievement Award; winner of The Elite News Communications Award; Shades of Success Honoree; and named one of the Top 25 Women in Dallas by Rolling out Magazine.

DeDe continues to give back to the community through countless non-profit organizations and scholarships such as the Women Called Moses, Beauty and Brains’ DeDe McGuire Scholarship and as the Community Ambassador for Dress for Success Dallas. In March 2018, she inaugurated DeDe’s Women’s History Month Kickoff Luncheon benefiting Girls Inc. Dallas and Dress for Success Dallas.

Dede enjoys spending time with her husband Chris Allen and their latest family addition, Little Dak Prescott Allen. Listen to “DeDe in the Morning” live weekdays from 5a - 10a and Saturdays 6a - 10a